5th Sunday of Easter (C) - "This is how all will know that you are my disciples, if you have love for one another.”

A friend of mine who I’ve known for 14 years was struggling with her faith.  She is a faithful Catholic who teaches at a Catholic school.  She’s faithful to Sunday Mass, and she prays.  She and her husband have a large family and send their children to Catholic school.  They are active in their parish.  She said to me recently that she doesn’t “see” Jesus in her life.  She doesn’t recognize him present among us.  She believes in the real presence of Jesus in the Eucharist and the teaching of the church, but in the daily grind of life, it is hard to “feel” the presence of God and that anything that she is doing is making any difference at all.  As a parish priest, I can relate to much of what she is going through.  But instead of giving her a theological answer, I recalled for her a time nearly 14 years ago when I was sick in bed with the flu and she (who I hardly knew at the time) called me to see how I was doing.  I was supposed to go to a Christmas party that she and her husband were hosting but had to call out sick.  This wasn’t a courtesy call - “Hope you feel better soon.  Sorry you can’t come to the party.”  Neither was she calling to give me advice on how to get better - how to “fix” my problem.  (You know how so many people just want to be helpful and they think they are being helpful by giving advice).  What struck me about her call was that she was interested in how I was doing and feeling.  When I told her my mom made me soup and I was taking vitamins, drinking plenty of water and getting some rest, she said, “that’s good, but how are you doing?”  In the grand scheme of things, a short phone call seems like almost nothing, but it communicated to me that I was cared for and loved - that my presence and my life mattered.  She went out of her way to call me.  I was surprised and  touched, and my heart was warmed.  I let her know that I experienced Christ’s love through her - that I saw him and recognized his presence in that simple gesture.  It was what my heart needed.  She was not just being a “nice” person.  She probably didn’t remember that phone call, but I couldn’t forget it, and it has changed the way I have thought of her ever since.  I cannot see her without remembering that Christ reached me through her.  This same friend was the one who introduced me to the ecclesial movement Communion and Liberation a few months earlier.  I heard about this Catholic “group” that started in Italy in the 1950s by an Italian priest who worked with high school youth, but I never met anyone in the movement.  She invited me basically to “come and see” and gave me the contact information of the fellow who led the weekly meeting closest to the Cathedral, the place where I was stationed at the time.  The group was made up of a handful of mostly graduate students at the University of Pennsylvania and some young professionals in the area.  Half of the people at the meeting were Italians, but one of the men who regularly attended the meeting was a guy named George who was a janitor at the university.  George was probably in his late 50s and had some physical as well as mental disabilities.  George was a bit unkempt, didn’t say much, and what he did say didn’t make much sense.  I really liked the texts that the group reflected on - their theological content resonated with me, the people in the group were serious about their faith and fun to hang out with, but what really struck me was how everybody loved and cared for this man George.  He would go out with us to a local pub after the meeting.  Someone would drive him home later.  Eventually, someone in the group became his power of attorney and advocate when he became hospitalized.  My friend and her husband would have him over for Christmas at their house because he had no family in the area.  Who is it that loves in this extraordinary way in the midst of ordinary life?  Who are these people that love in this way?  At the Last Supper, Jesus tells his disciples, “My children, I will be with you only a little while longer…” and then he gives them the “new commandment”: “love one another.  As I have loved you, so you also should love one another.  This is how all will know that you are my disciples, if you have love for one another.”  Christ is known in the love that his disciples have for one another.  We know that someone belongs to Christ by the love they have for another.  After the Resurrection, Jesus appears to the disciples, but he doesn’t look like Jesus.  He appears as a “stranger”, a “foreigner”, a nondescript man.  Mary Magdalene mistakes him at the tomb for the gardener.  But they recognize him in the way he speaks to them and the kind and tender gestures he does.  In this resurrection scene, Jesus from the shore calls out to the disciples, “Children, have you caught anything to eat?”  He then tells them where to cast the net.  They pull in a great catch.  When they get to shore, Jesus has prepared breakfast for them.  It is a simple gesture that communicates a great love and care for them.  “And none of the disciples dared to ask him, ‘Who are you?’ because they realized it was the Lord.” (Jn. 21:12)

When John, the beloved disciple - the same disciple who in this resurrection scene was the first to say, “It is the Lord!”, has a vision of the “new Jerusalem, coming down out of heaven from God”, the voice from the throne of God tells him, “Behold, God’s dwelling is with the human race.  He will dwell with them and they will be his people and God himself will always be with them as their God.”  God continues to dwell with us through his Body, the Church - through the lives of Christians.  The Church is the continuation of the Incarnation in time.  This is the “new” way Christ makes himself known to us and communicates his love and his presence - when his disciples love one another.  When Paul and Barnabas proclaim the Gospel and travel throughout the region, they returned to the places they preached to strengthen the spirits of the disciples.  It is not enough to hear a “message” to sustain the faith.  Rather, an ongoing personal presence of someone living the faith is needed.  So what do they do?  “They appointed elders for them in each church and, with prayer and fasting, commended them to the Lord in whom they put their faith.”  Each community needs a person of faith to be present to witness  - to be an authority - that will nourish the faith of the others.

The thing that keeps my faith alive and strengthened is the small group of friends that I meet with weekly.  We share our struggles and our joys, but like Paul and Barnabas, we witness to what God has done in our lives and how he has touched us and others, opening the door of faith.

At the Priest Convocation this past week, Archbishop Perez spoke about creating a culture of “missionary disciples” in the diocese.  A missionary disciple is someone who has met the Lord, recognized his presence in his life, and is on fire with love for Jesus.  The missionary disciple shares, because of communion with the Lord, Jesus’ desire that others know the Father’s love.  They are moved to go out of their comfort zone, meet people where they are at, proclaim the core of the Gospel, share their personal faith story, and make the invitation for another to “come and see” what the Lord has done.  We were all challenged to examine our personal relationship with Jesus.  Where do we see him?  Who do we know who is living the faith and can share the fire of his love?  “It is necessary to undergo many hardships to enter the kingdom of God” but we do not have to make that journey alone.  Now that the pandemic is behind us, I want to initiate some small-groups in the parish which will be a way for us to strengthen our spirits and persevere in the faith and do what those first disciples did and we continue to do today to “see the Lord.” 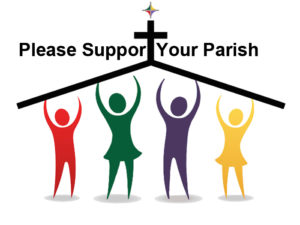